Just one guy today ( 3 others cancelled can you believe?)

"Mr.Birmingham" is a fit , handsome, young black boy.
He lives in Birmingham, is straight and has a girlfriend.
He has never met a tgirl before.

He travelled hundreds of miles on a coach - just to visit me !
Makes sense though. Think about it. The minimum price you will pay for an escort to "treat with respect" is £100 (often much more) , why not spend just £30 or something on a coach trip and use me "nasty" for nothing ?

Mr.Birmingham had an agenda. He wanted to use me as nasty as possible.
So , as soon as he arrived his dick was down my throat and it stayed that way for almost two hours.
He likes to throat fuck and make a gurl puke. He succeeded as i struggled to take the onslought on my throat.

It is nice to know that there are such young men as him (he is maybe 22 - 25yrs old ? ) who choose to take out their aggression and fulfill their fantasies with a compliant sex slave to Black men , like myself. 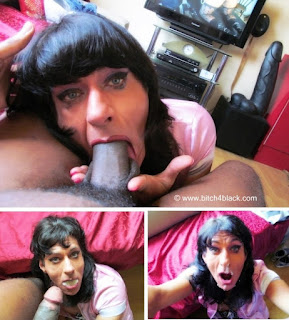